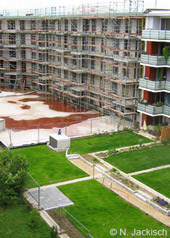 Although there are guidelines and laws on the use of plant protection products and biocides, threshold values and environmental quality standards are often exceeded in ground- and surface waters (Wicke et al., 2015).
The research field of biocides of urban origin is still relatively young. However, in some cases, the biocide loads of urban origin in water bodies can be higher than the pesticide loads from agriculture (Gerecke et al., 2002 and Wittmer et al., 2011).
In order to determine the exact risks of biocides, it must be known which biocides are used in the various material protection agents, since each biocide is differently toxic and has different environmental influences. Selected biocides that are frequently used in façade protection are presented below. They represent the general hazards posed by biocides. 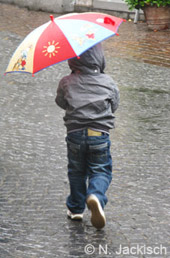 Diuron
Diuron is an herbicide that is used more frequently as a biocide in facade protection. In contrast to many other biocides, diuron has been relatively well researched, as Wessels and Van der Veen described its effect as early as 1956.
Diuron is used against weeds and mosses as a biocide in material protection and as a pesticide in agriculture. It is one of 45 priority substances in the EU Water Framework Directive and is banned as a pesticide in Germany. In the environment, it is more likely to be retained in humus-rich soils, but can also be washed out and released into groundwater, where relatively long residence times are to be expected (Lange et al., 2017; Gooddy et al., 2002; Giacomazzi and Cochet, 2004). It is mainly converted to 3,4-dichloroanilines (3,4- DCA) by fungi or bacteria. It is problematic that some of the transformation products have higher toxicities than diuron itself (Giacomazzi and Cochet, 2004). According to the European Chemicals Agency (ECHA), diuron is very toxic to aquatic organisms with long-lasting effects and is suspected of being carcinogenic. 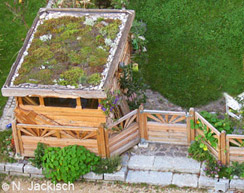 Terbutryn
Terbutryn is also an herbicide with a similar mode of action as diuron and comparable distribution in facade protection. Similar to diuron, it is a priority substance in the EU Water Framework Directive and banned as a pesticide in agriculture in Germany. It is therefore only used as a biocide in Germany for domestic use or to protect building materials.
Nevertheless, as shown by Quednow and Püttmann (2007), it can be detected in surface waters (282 of 330 samples were positive), which is problematic with regard to its high toxicity to aquatic organisms (ECHA). Due to its frequent use in façades, terbutryn is well suited as a tracer for façade drains (Burkhardt et al., 2011).