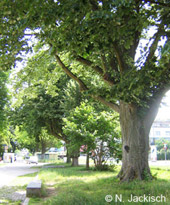 Biocides are classified according to the European Biocide Regulation No. 528/2012 and differ from plant protection products by definition only by the "intention of use". While plant protection products are intended to control unwanted pests in agriculture in order to improve yields, biocides are used to protect materials. Biocides and pesticides are grouped under the term pesticides and can be the same substances on a chemical basis.
Biocides are used to protect building materials, both outdoors and indoors, or are used "to protect" humans, such as in bug spray or disinfectants. According to the German Federal Environment Agency, there were approximately 43,000 biocidal products on the market at the beginning of 2017 (Umweltbundesamt, 2017).
One common application of biocides is in facade paints. Here they serve to prevent algae and fungal growth. As a rule, the organisms do not harm the building fabric, but are perceived as aesthetically unsightly. 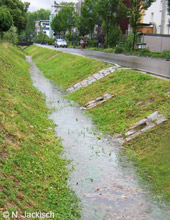 In order for biocides to exert their effects, they must come into direct contact with potential harmful organisms. To ensure lasting protection, biocides must be permanently available on the surface of house facades. When rainwater hits the house façade, the biocides are released from the protective coating in which they were bound and transported with the water to the surface of the façade. There they can be washed off and enter the environment. Scientific studies show on the basis of measurements that biocides find their way into sewage treatment plants through leaching. According to the German Federal Environment Agency, biocide residues have even been found in earthworms on fields that were fertilised with biocide-contaminated sewage sludge. Biocide residues have also been detected in fish living in waters into which sewage treatment plants drain. 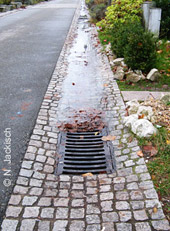 Biocides can enter groundwater and surface water in many ways. Some exemplary paths are listed below: Since the soil, groundwater and surface water systems are in constant exchange with each other, biocides are also measured in the components of the water cycle with increasing tendency. Although concentrations are usually low, biocides can reinforce each other in their effectiveness. Likewise, transformation products, i.e. the products of incomplete biocide degradation, are often still under-researched. However, higher toxicities have already been found for individual transformation products than for the parent substances.