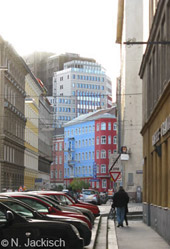 Since a biocide alone is often not sufficiently effective, about three to five different active substances are combined in typical protective coatings, so that biocide concentrations of 0.3 g/m² to 4.0 g/m² are achieved in the paint or plaster of the facades (Burkhardt et al., 2011, 2009).
For their effectiveness, the biocides must be transferred from the facade protection to a liquid phase in order to be able to come into contact with potential pests (cf. section “Problem”) This process takes place when water reaches the facade and penetrates into the facade pores. During the subsequent drying of the facade (caused by evaporation from the facade pores), further biocides are transported to the facade surface. This process is intended because there are pests on the facade surface, whereas the biocides are bound in the material (plaster or paint).
The disadvantage is that biocides on the facade surface can easily be released into the environment, for example by washing out during precipitation or directly by volatilisation. As a result, the biocides are no longer available for pest control and "new" biocides must escape from the materials to ensure continuous pest control on the material surface (Erich and Baukh, 2016; Schoknecht et al., 2009). 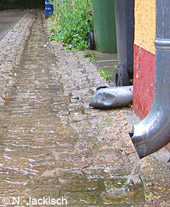 Laboratory tests show that maximum biocide leaching can be defined due to the diffusion properties of the materials used to protect house facades. The older the house facades, the more difficult biocides detach from the facades. This process is indicated in "solution rates for biocides". Since the rates are declining relatively slowly, biocides can still be washed out long after façade installation. The same results could also be measured in field trials in catchment areas and model houses. Similar dynamics are observed for a singular precipitation event. Thus, the intensity of biocide leaching is highest at the beginning of a rainfall and decreases with increasing precipitation duration (Schoknecht et al., 2016, 2009; Wittmer et al., 2011; Erich und Baukh, 2016; Burkhardt et al., 2012).
Maximum concentrations can be in the order of 1 mg/l and 2 mg/l for terbutryn and octhilinone (Schoknecht et al., 2016).
Measurements and modelling in Freiburg i. Br. show that biocides can still be washed out of even 17-year-old facades. In the case of heavy rainfall events, biocide concentrations in the range of the initial concentrations can still be achieved a few years after façade installation.
The amount of biocide discharge depends largely on how much water reaches the façade and not how much precipitation falls. Therefore, structural measures that keep rain away from the façade (e.g. roof overhangs or wind blockades) are efficient methods of reducing biocide discharge. 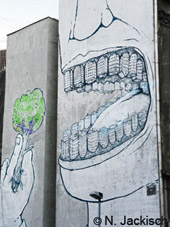 As can be seen, biocides can be classified as dangerous for the environment. However, it is difficult to precisely identify individual biocides and assess their risk. The transformation products (i.e. conversion products from biological, chemical or photolytic processes) of the biocides are to be regarded as particularly critical, since to a large extent no information is available here yet!
As described above, biocides can be discharged in various ways. The resulting dangers for the environment are manifold and depend on the discharge routes:
Washed out biocides can be discharged directly at the lower end of the façade with the precipitation water into the soil along the houses and under certain circumstances penetrate into the groundwater. If the biocide-polluted water, e.g. from the facades, is discharged into technical precipitation seepage systems (swales, trenches), the biocides can also be transported by the same route. It is problematic if the seepage passage or pre-treatment of the plant is not sufficient to retain the biocides before they are transported into the groundwater.
Surface water discharge paths are created by separating sewers with rainwater discharge but also by discharges from sewage treatment plants without a fourth treatment stage, which are generally not able to retain the entire spectrum of biocides to a sufficient extent.
Literature: