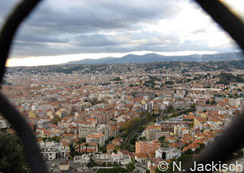 In urban areas, measures for stormwater infiltration can become groundwater discharge pathways for biocidal active substances from building products (especially facades or protective coatings) if the barrier effect is not sufficient. In order to better assess this risk, the web model FReWaB-PLUS was created within the framework of the MUTReWa project for the simple simulation of water volumes and thus potentially mobilised biocide loads. In the INTERREG research project NAVEBGO, which is funded by the European Union, FReWaB-PLUS is used to estimate the biocide loads in the project cities of Strasbourg, Landau, Lüneburg and Freiburg. In doing so, it is constantly being further developed. Within the framework of NAVEBGO, a German-French cooperation project, FReWaB-PLUS is also translated into French.

Thanks to its user-friendliness, FReWaB-PLUS can be used very easily by urban planners and authorities throughout Germany.